District Profile
Alappuzha district was formed on August 17, 1957. It was carved out of erstwhile Kottayam and Kollam districts. Latitude of the district is 9o 5' N and longitude is 76o 17 to 76o44 E'. It is the smallest district in the State with an area of 1414 sq.km.

Geography
Alappuzha is the sandy slip of land intercepted by lagoons, rivers and canals. There are no mountains or hills in the district, but for the scattered hillocks lying between Bharanicavu and Chengannur Block Panchayats.  80 per cent of the district area lies in the low land region and midland occupies the remaining area.  Alappuzha is the only district in the State with no high land or forest land. Waterbodies are spread over 10 per cent of the geographical area of the district and Kuttanad area is located below sea level.

Brief history
Present town owes its existence to Raja Kesavadas of the 18th century. Kuttanad, the rice bowl of Kerala, was well known from early days of the Sangam Period. As per historical record, Alappuzha had trade relations with ancient Greeks and Rome in the middle ages.

Agriculture
Major Agricultural Crops are Rice and Coconut. Rice is cultivated in an area of 38052.47 hectares. Kuttanad is known as the ‘Rice Bowl of Kerala’. 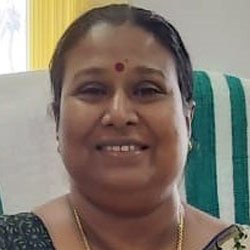 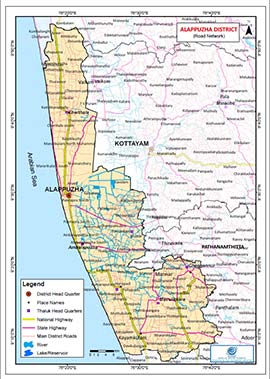 Some of the works under AMRUT

A completed house under PMAY-Urban