Idukki district, the second largest district in Kerala, came into existence on January 26, 1972, by carving out Devikulam, Udumbanchola and Peerumedu taluks from erstwhile Kottayam district and Thodupuzha taluk (excluding Kalloorkad Village and portion of Manjalloor Village included in Kalloorkad and Manjalloor Panchayats) of erstwhile Ernakulam district.

At the time of formation the district headquarters was at Kottayam. In 1976, it was shifted to Painavu in Thodupuzha taluk.

Idukki district consists of 2 Revenue Divisions, Idukki and Devikulam. There are 5 taluks in the district:

In Idukki district, nearly 90 per cent of the area comes under high ranges covered by mountains, hills and deep valleys. There is only a strip of middle land in the western part of the district. More than 50 per cent of the area of the district is covered by forest. There are 14 peaks in the district which exceed a height of 2000 meters above the sea level. The highest peak in south India Anaimudi which has an estimated height of 2817 meters, lies in eastern portion of Kannan Devan Hills Village.

The district's name, 'Idukki' is supposed to be derived from the Malayalam word 'Idukku' which means a narrow gorge. Periyar which is one of the largest rivers of Kerala, flowing through Idukki gorge formed between the two high massive rocks called "Kuravan mala (839 meter height)" and "Kurathi mala (925 meter height)", is the site of the gigantic Idukki arch dam. The excavation by the State Archaeology Department in Marayoor in the Anchunad Valley of Devikulam taluk, Thengakkal near Vandiperiyar, Bison Valley and Thondermalai show distinct characteristics of pre-historic civilisation. The district had an important role in the spice trade of ancient period as spices such as pepper and cardamom grow more in abundance in this district than elsewhere in the State.

Educational Institutions in the district 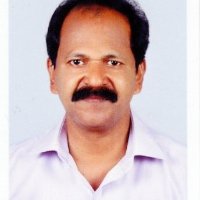 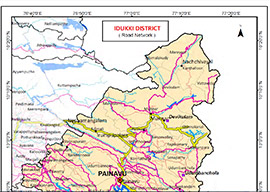