Kannur district was formed on January 1, 1957, when the erstwhile Malabar district and Kasaragod taluk of Madras State were reconstituted into three districts namely-Kannur, Kozhikode and Palakkad. At that time, the district had 6 taluks including Mananthawady (now in Wayanad district), Kasaragod and Hosdurg (Now in Kasaragod district).

Kannur district lies between latitudes 11o 40’ to 12o 48’ north and longitudes 74o 52’ to 76o 56’ east. The district is bound by the Western Ghats in the east (Coorg district of Karnataka State), Kozhikode and Wayanad districts, in the south, Lakshadweep Sea in the west and Kasaragod district in the north.

The district headquarter is Kannur. The district has two Revenue Divisions and five taluks namely, Thalasseri, Kannur, Thaliparamba, Payyannur and Iritty. There are 129 revenue villages. Kannur district has 71 Grama Panchayats and 11 Blocks. Besides, there are 9 Municipalities namely, Kannur, Payyannur, Thaliparamba, Thalasseri, Mattannur, Koothuparamba, Sreekandapuram, Anthur and Panoor and 1 Municipal Corporation.

The district can be divided into three geographical regions - highlands, midlands and lowlands. Based on the topography, geology, soils, climate and natural vegetation, Kannur district is divided in to 4 sub micro regions.

Cannannore coast
This region lies as a narrow coastal strip on the western side of the district and cutting longitudinally all the taluks of the district. The central tract is generally flat except the rocky cliff near Ezhimala (260m) and in certain isolated pockets in the northern coast and around Thalasseri coast. Laterictic Cliffs of Pre – Cambrian age are found here.

Taliparamba- Koothuparamba Plain
This region is bound on the north and east by Peringome- Mattannur undulating upland, on the south by Kozhikode district on the west by Kannur coastal plain. This rolling plain gently slopes towards west. The maximum height (159m) lies in its southern tip at the Kolavellur region of Thalasseri taluk and its minimum height (63m) lies at Pattuvam village of Taliparamba taluk.

Peringome- Mattannur undulating Upland
This region is bound by Kasaragod Table- land in the north, Karnataka State in the east, Kannoth forested hills in the south and Taliparamba- Koothuparamba plain and Cannannore coast in the west. The region has undulating terrain with number of isolated hills.

Kannavam Forested Hills
This region is bound on the north by the Peringome-Mattanur undulating upland, on the east by Karnataka State, on the south by Wayanad and Kozhikode districts and the west by the Taliparamba-Koothuparamba plain.

The maximum height of this region is 1047 m located at Cheruvancherry village of Thalasseri taluk. Occasional landslides are the feature of the region during monsoon seasons.

Most of the rivers are perennial and provide good scope for irrigation and for controlling floods through minor irrigation projects. The Valapattanam river is the longest river in the district, originates from the Brahmagiri Ghats located about 15km north of Mananthavady. The Kuppam river originates from Padinalkkad Ghat Reserve Forest in the Kodagu district of Karnataka State and flows westwards through Thadikkadavu, Kaveri and Thaliparamba and joins the Valapattanam River. The Mahe river also known as Mayyazhippuzha originates from Wayanad Ghats and passes through Mananthavadi taluk of Wayanad district, Vadakara taluk of Kozhikode district and Thalaseri taluk before it joins the Lakhadweep Sea at Mahe about 6 km south of Thalasseri.

Kannur district derived its name from the location of its headquarters at Kannur town. According to one opinion, ‘Kannur’ is a derivation from Kanathur, an ancient village, the name of which exists even today in one of the wards of Kannur Municipality. Another version is that Kannur might have assumed its name from one of the deity of the Hindu pantheon, a compound of two words, Kannan (Lord Krishna) and Ur (place) making it the place of Lord Krishna.

Kannur district is known as the land of looms and lores, because of the loom industries functioning in the district and festivals held in temples. The district is a major centre of Theyyam, a ritual dance of northern Kerala. Small shrines known as kavus associated with the Theyyam dot the district.

A majority of the population of the district is dependent directly or indirectly on agriculture for their livelihood. The main crops grown in the district are paddy, coconut, pepper, cashew, tapioca, arecanut and plantation crops like rubber. Asia’s largest cinnamon estate producing cinnamon spice established by Lord Brown of British East India company in the year 1767 is located at Anjarakandy in Kannur district

Paddy occupies the largest area among annual crops. The average yield of paddy is recorded as 2146 kg per hectare. Next to paddy, coconut is the most important crop in the district. Coconut is extensively grown throughout the district. An important cash crop grown in the district is cashewnut. Among spices, pepper occupies an important place. Pepper is mostly grown as an intercrop with coconut, arecanut and various fruit trees. In the hilly areas of the district, the inter-cultivation is done with rubber and cashew. Rubber is the most important industrial cash crop among the plantation crops. About 55 per cent of the rubber cultivation of Kannur district is in Thaliparamba taluk, followed by Thalassery and Kannur taluks. The yield of rubber per hectare varies from 2000 kg to 4000 kg. 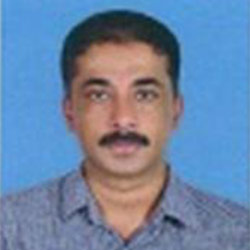 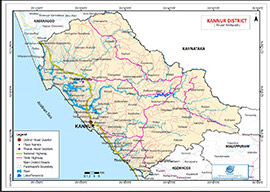 Inauguration of the Power Plant by District Collector