The name Thiruvananthapuram means the abode of sacred snake ‘Ananthan’. The modern era begins with Marthanda Varma, the founder of modern Travancore. The beginning of English education by opening of an English School and setting up of an observatory and charity hospital during the period of Swathi Thirunal are landmark events in the history of the district. One of the significant contributions of Sri Moolam Thirunal was the inauguration of the Legislative Council in 1888, the first Legislative Chamber in an Indian State.

The total geographical area of the district is 2,192 sq. km. More than 15 per cent of the total population of the district depends on agriculture for their livelihood. Paddy is the most important crop cultivated in the wet lands. In garden lands, coconut, rubber, banana and vegetables are the main crops. The fisheries sector has importance in the district due to the 78 km long coastal line, reservoirs and inland water bodies.

Thiruvananthapuram district serves as the nodal district of four Members of Parliament - Two from LokSabha and two from Rajya Sabha. They are:

Legislative Assembly Constituencies in the District 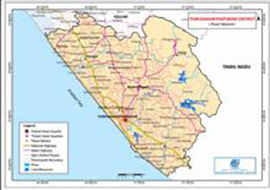