The power project with a capacity of 40 KW is the initiative of Palakkad District Panchayat with the participation of 9 Block Panchyats and 18 Grama Panchayats It is the second micro hydroelectric project in the State implemented in Meenvallam of Karimba Panchayat with the initiatives of Local Self Governments. The total project cost was Rs 22.00 crore. Out of which Rs 2 crore was received from Backward Region Grant Fund(BRGF) and a loan Rs 7.79 crore from NABARD (RIDF – XII) and the balance fund was mobilised from the shares of local bodies. A 3 MW hydroelectric project was implemented in 2014. This is the first micro hydroelectric power project, after the 11 KW project started by KSEB in January 2016 in Peringalkuthu.  The Palakkad District Panchayat has been awarded Bharat Ratna Rajiv Gandhi Grama Swaraj Award for 2011 and 2013 for this project. 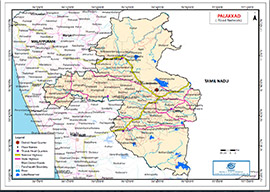